What’s the matter? You don’t want a ten pound coffee machine with lights, Bluetooth and settings that can help E.T. get home? Are you sure? Then you are probably one of those coffee drinkers that wants to brew a single cup of coffee quickly and enjoy it before you head off to the office.

Perfect! Today I will explain the similarities and differences of the Keurig K10 and the Keurig K15: two of the Keurig Mini line up. We will discus their features, and I will tell you which one you need to buy. Seriously. It isn’t a guess this time. Read the article to find out why you want the Keurig K15.

This is the place where those of you that follow my articles have learned to look to spot the differences in the two models I am comparing. Except, for the first time ever, I don’t have anything for you. There are two major differences that I will explain later. However, since I like bullet lists, here is one of them:

Lets see what the two machines have in common.

Want to see the two little machines side by side? Me too!

Let’s take a look at the features and options of these tiny machines.

It doesn’t get any simpler than the Keurig Mini line. You add water to the reservoir (up to 10 ounces) place a pod in the pod cup, place a coffee mug under the dispenser nozzle and press the only button (aside from the power button) to brew your cup of coffee.

Within two minutes you will have a fresh, hot cup of coffee. What you will notice right away, is that you have no control over how strong or weak the coffee is. Although that isn’t entirely true. You can add more water (up to 10 ounces) for a larger brew size to obtain a weaker brew. Or less water (down to 4 ounces) for a smaller brew size and a stronger cup. 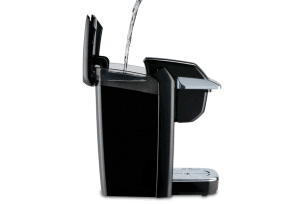 If you are anything like me though, a four ounce cup of coffee just really isn’t going to get me through the day, or even to the car. However, if you want a good cup of coffee without a fuss, these mini machines are perfect.

Bottom Line: This is a tie. The machines are identical.

Remember earlier when I told you there were two differences and I only listed one for you? That’s be cause the other needed more than a bullet point to explain. The K10 was discontinued after a recall.

A couple hundred complaints came in that stated the Keurig K10 can cause the water in the reservoir to overheat, spray out and cause burns to consumers. You can read about the recall here.

Keurig’s answer was to discontinue the manufacture of the K10 and fix the problem, reintroducing the K10 as the K15. Other than the recall fix, there is absolutely no difference in the two models.

You should note, that if you are a fan of the Mini line, and you have a B31 model, that one is also affected by the recall. The B31 was renamed the K10 later in life.

Bottom Line: This round goes to the K15. It wasn’t recalled. Easy win.

It is easy to see why I am choosing the K15 over the K10. It is all about the recall. But is that really it? Basically, yes. However, there is one thing I would like to point out.

Keurig produced and shipped over seven million K10 units. Of all of those only about 200 had a report filed, causing the recall. Now, this doesn’t mean that every machine is not capable of over spray and causing burns. However it doesn’t mean they will either.

If you are looking for an inexpensive, simple to use single serve coffee maker, you can find the K10s for a good price. If you are willing to take the chance, it may be worth the cost savings to you.

However, if you would rather err on the side of caution, have the exact same machine and not have to worry if the coffee maker is too close to a computer or wall outlet, then go with the K15. The extra bump in price over the K15 might be worth your peace of mind.