Keurig has been making single serve coffee a reality in your kitchen for almost three decades. Each year providing better and better machines to do the job. The K50 model was a fan favorite based on reviews and sales. Is the K55 any better?

In this article I will examine the two coffee makers and compare them side by side. We will take a close look at the features and options of each machine and I will tell you the similarities and differences of the machines, before expressing which one is the better purchase. If you are just dying to know: The Keurig K55 is the better deal.

Technically the two models are a year apart, although they were released in the same calendar year. What is different?

The differences aren’t much. Everything else is near identical, including:

Let’s take a look at each machine side by side.

Let’s take a closer look at what is going on with these two coffee makers with their features and options.

Let us start off with the differences in the two models: their size on the counter and weight out of the box.

The Keurig 50 weighs seven and a half pounds. As far as single serve coffee pots go, it is fairly light. One issue I have found with lighter coffee pots is that they tend to move around the counter as you press buttons to operate or remove or attach the carafes, water tanks, etc.

Keurig doesn’t have this problem over all. You will slide it around to add the water tank after you fill it most likely, but it won’t move on its own. Unlike some of the others all of the control buttons are on the top, which prevent the familiar side scoot of other types.

The Keurig 55 is much heavier at twelve pounds. I don’t view this as a problem or an advantage. You aren’t going to be lugging the coffee maker around on a daily basis, so once you gt it out of the box and set it up, it is pretty much going to stay where it is.

Assuming you can lift the 12 pounds to get it on your counter, the weight isn’t an issue. The height might be, though, depending on where you plan to place it.

The K50 sits 13 inches tall and just over 13 inches wide. You have to lift the K-Cup holder to insert the cups which will add a few more inches. If you have low hanging cabinets that the coffee maker is stored under, you may find yourself pulling it out from underneath them to add or remove a K-Cup.

The K55 on the other hand only stands 12 inches tall. While the inch difference really isn’t noticeable, it may be enough to leave the maker under the top cabinets while in use. However, it is about an inch wider, which means its foot print takes up a bit more space on your counters. If you struggle for space for your appliances, this may be an issue for you.

All in all, the height, width and weight really aren’t a factor, and placed side by side you would be hard pressed to tell which one was which.

Bottom Line: It really is a tie. You loose height or you lose width, the weight never really comes into play.

Keurig considers the K series to be one of their more economical lines. To help reduce the price, they have left off some features that other lines have. The most notable is the removal of the clock. They also did not add the temperature reading or the pressure readings that some of the other models have.

The buttons that they do have though are really all you need. The power button turns the machine on and brews your coffee when the cup holder is locked in place. You can also select the brew size in either four ounces, six ounces or ten ounces.

The optimal brew size is six ounces. Keurig claims that this is the size that will produce the best and strongest flavor. The other button on the top panels is the descale option. This is used when you want to clean the machine.

There are reports that the K55 buttons have a smoother press and are easier to use, but the functionality of each is identical.

Bottom Line: A tie. Each control panel is identical. 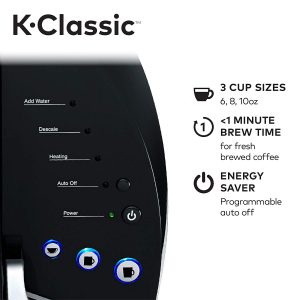 Each model claims to be able to brew a cup of 6 ounce coffee in under a minute. For the most part it is true. Certain factors will go into this claim though, the most obvious is the temperature of your water before you begin.

If you have water in your fridge that you use, it may take an extra 10 to 15 seconds to get your cup of coffee if you use the K50. The K55 didn’t seem to have an issue and each cup came in under a minute.

Both also offer a two hour automatic shut off. If you leave the power on the machine will shut itself off in two hours to conserve power and energy costs.

Bottom Line: The K55 wins. Someone has too, and the K55 always brewed in under a minute.

The reservoirs on the two models are identical. Each one holds 48 ounces of water, which if you do the math, means you can brew eight cups of six ounce optimal strength coffee. In all likelihood you will only brew about five or six before you replace the water. But you can brew more if you want.

The reservoirs are removable for refilling and hand cleaning, which is advised to do at least once a week.

Bottom Line: Another tie. The reservoirs are the same. 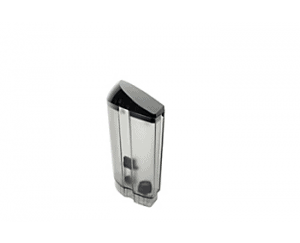 One of the best things Keurig did was remove the restriction of only being able to use Keurig brand K-Cups. Now you can use any cup, pod or single serve coffee cup on the market.

You can brew hot or iced coffee, tea, hot chocolate and specialty drinks. You aren’t limited any longer to only what Keurig produces.

Bottom Line: Yes, it is a tie. You can brew anything in either model.

Which one is right for you? It really depends on what you are going after. Both of the machines are near identical with the only real difference being the height or weight, which, if I am honest really doesn’t come in to play that much.

If you already have the Keurig K50 there is no reason to upgrade to the K55. You won’t have a different experience and everything is the same.

However, if you don’t already have a Keurig and are looking to make a new purchase, you may as well go with the Keurig K55. It is the newer model and is designed to last longer than the K50. This is the only reason I can even decide for myself. Being so identical it really is a judgment call on your part.

It also helps that the K55 is slightly less expensive. That is why I pick the Keurig K55 as the winner of this match up.