When it comes to electric fans, Dyson makes some of the best in the market. The classic bladeless design is one of the reasons they appeal to consumers. The Pure Hot + Cool HP04 and Hot + Cool Jet Focus AM09 are two of Dyson’s popular products.

The HP04 is the latest model from the Pure Hot + Cool series while the Dyson AM09 is the Hot + Cool’s crown jewel. They are both great on their own and their main differences lie on their functions and features.

They are both fans but the HP04 is a purifier equipped with WiFi while the AM09 is a heater without WiFi.

If you are planning on buying either of these two powerful Dyson fans then you are in the right place. In this article, we will be looking at their differences, similarities, and specifications to help you decide which fan is best for you.

Differences between the Dyson HP04 and the AM09

Similarities between the Dyson HP04 and the AM09

The table below provides the specifications for the HP04 and the AM09:

Comparing the Dyson HP04 vs AM09 in Detail

The Pure Hot + Cool’s HP04 was an upgrade of the HP02 which in turn is the enhanced version of the original HP01. The HP04 is a fan with a sealed HEPA + Carbon and Active Carbon air filtration system and a heater. 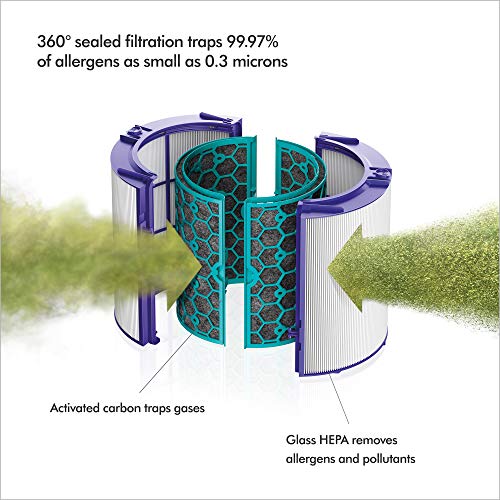 The air filtration system allows the HP04 to filter the air. Its HEPA + Carbon filter captures 99.97% of microscopic particles as small as 0.3 which usually evades most regular filters while the Active Carbon takes in bad odors, gases, toxins, and VOCs (Volatile Organic Compounds).

While the advanced filtration system of the HP04 is remarkable as it is, the unit is also fitted with a heater and a fan making HP04 a 3-in-1 machine. The HP04 is also certified asthma and allergy friendly by the Asthma and Allergy Foundation of America.

On the other hand, the Hot + Cool Jet Focus’ AM09 is a much smaller machine and does not support the air purification feature of the HP04. Although, it is equipped with a heater and fan for dual functionality.

Dyson prides itself on their very own Air Multiplier technology, which makes it possible for them to hide the big spinning blades of a traditional fan. The design of the AM09 and the HP04 are almost identical but, of course, the HP04 is way bigger because of the filters. They both have an oblong-shaped tower design with their blades and heating elements hidden. The HP04 and the AM09 have a classic Dyson look that is constant to all Dyson fans – modern and aesthetically pleasing.

When it comes to wireless connectivity, both the HP04 and the AM09 have remote controls making it easy for you to command them but the HP04 is WiFi enabled which enables the device to connect to your smartphone via the Dyson Link App and to your home through Alexa.

The Dyson Link App is an app that you can download on your smartphone and it allows you to command your device through your phone even if you are not home. While connecting the HP04 to Alexa lets you control the device using your own voice.

The HP04 and the AM09 also have LED displays that show the temperature of the fans but the HP04’s display is more advanced and does not only indicate the temperature but also what kind of allergens or air particles are floating in your room. Cool right? That is why HP04 is best for people who have allergies or asthma.

The AM09 has Jet Focus Mode if you want a more direct air flow, Diffused Mode for wider air distribution, and Automatic Mode. Meanwhile, the HP04 also has the same modes but it gets two extra modes called the Backward Airflow Mode which allows you to enjoy purified air even without the heating or cooling function; and Night Mode which dims the display and for a more quiet air stream – perfect for when you are sleeping. The HP04 also has a 350-degrees of oscillation and can distribute purified, hot, or cool air around the full radius of the room.

When it comes to safety, the HP04 and the AM09 are great for homes with kids and pets because the spinning blades and the heating elements are not visible, however, the HP04 does not have Child Safe. The AM09 has a Child Safe feature which allows the device to automatically shut down when knocked over – a nice feature to have if you have active kids and pets running around the house.

The price of the HP04 and the AM04 are very different. Because of its filtration system, WiFi connectivity, and bigger body, the HP04 is more expensive than the AM09 while the latter is more affordable but you won’t get air purification and WiFi features of the HP04.

A. The AM09 does not have the WiFi feature but the HP04 has WiFi connectivity and can be linked to the Dyson Link App as well as smart home technology Alexa.

Q. Can the AM09 and the HP04 effectively heat a small room?

A. Yes, both the AM09 and the HP04 can heat an entire room. Also, Dyson said their fans are for large room use.

Q. How often do we have to change the filter for the HP04?

A. Dyson suggests that filters need to be changed once a year based on its running 12hrs/ day. Authentic Dyson filters are recommended.

Q. Does the unit automatically return to power if the electricity suddenly goes out?

A. No, both the HP04 and the AM09 do not automatically turn the power on, however, the AM09 automatically shut down when they’re accidentally knocked over.

Q. How much energy do they consume?

Q. What are the differences between HP04 and AM09?

A. The HP04 has an air purification benefit and as well as WiFi connectivity, while the AM09 does not have any of those features.

A. Dyson engineered it to never rise above the maximum of 200°C and the unit intelligently adjusts its output based on the temperature of the room.

Q. Do they come with a remote control?

A. Yes, both the HP04 and the AM09 both have remote controls.

Q. Does the Dyson Link App also serve as the remote control?

A. Yes, Dyson Link App can do everything the remote can and more but it does not allow you to change the heat temperature and you will need to use the remote to adjust it.

The Pure Hot + Cool’s HP04 and Hot + Cool’s Jet Focus’ AM09 are both impressive units but they have different purposes. The Dyson HP04’s main role is to purify the air. It has a sealed HEPA + Carbon filter that captures allergens, pollens, dust, molds, and other air pollutants which could be harmful to asthmatics and people with allergies. It also has an Active Carbon filter that eliminates household odors, fumes, gases, toxins, and other VCOs (Volatile Organic Compounds).

On the other hand, the AM09 is a heater and a fan. It is a great fan to have in the house especially if you have kids and pets because of its Child Safe feature that allows the device to automatically shut down when tipped over.

For a fan, the HP04 and the Dyson AM09 are expensive so if you are planning to get one make sure to consider these things:

The HP04 and the AM09 are expensive. Although they are multipurpose machines, it doesn’t change the fact that they are pricey. So if I were to pick which model I should get, I would pick the HP04. You will be paying a bit more but you will also get a lot of additional features like the WiFi connectivity and the air filtration system.

The Child Safe feature on the AM09 is great to have but I think it is somewhat redundant because the fans do not have exposed fast-spinning blades and the heating elements are hidden as well. If you need a great heater fan, the AM09 is okay but there are more affordable heater fans available in the market that have the same functions and benefits as the AM09.