When it comes to single serve in-home coffee makers, Keurig is the most noted and purchased name in the business. For over 30 years they have been making coffee makers with one goal: Get you a cup of great tasting coffee and do it fast.

So when you look at Keurig you will find over 40 different options. Which one is right for you? Today we will compare the K425s and the K525c side by side to see which one is better. Read the article below to find out the blow by blow comparison, or if you want to know the result: The K525c is the better choice.

Like a lot of the similar line up models, there aren’t a lot of differences. The ones they do have, though, are large:

What they share in common is abundant. Let’s have a look:

Now we will compare the two models side by side so you can see all the features.

Now I want to dive a little deeper into the features and options of the two models. You will have a better understanding of what they are capable of so you can make an informed decision.

The controls on the models are virtually identical. You have the single round button on the front panel and a touch screen. To brew the coffee you just have to press the button. During set up and programming you will set all of the features of the machine up for every day use.

Using the touch screen you will set the temperature, cup size, brew strength and if the pot should turn on at a certain time and start brewing. This last feature is really nice for waking up to a freshly brewed pot or cup of coffee without having to do anything while you are still groggy.

Bottom Line: A tie. The settings for brewing coffee are identical.

One of the differences in the models is the size of the water reservoir. The K425s has a 70 ounce reservoir while the K525c has an 80 ounce tank. Both are removable, and will accommodate enough water to brew several cups, or even a few carafes.

Which one works better for you depends on your individual needs. If you only brew a cup or two per day, then I would suggest the 425, as the smaller tank will be less likely to sit stagnant. You will want fresh water more often, and with a small brew, 70 ounces is more than enough.

However, if you are more like me and go through a couple of pots per day, the larger capacity of the 525 might be your best bet.

Bottom Line: The K525 wins. Larger is usually better when it comes to coffee. 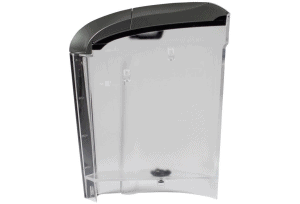 In addition to the brewing button, you will find a touch screen display on the front panel of the coffee makers. There are a few differences here.

First is the size of the display. The K425s has a 2.4 inch display where the K525c display is 2.8 inches. That near half an inch is big though, especially when you are trying to fumble around at 6 in the morning looking through one open eye.

Other than the display size, they are virtually identical. The brewing settings are the same, the maintenance alerts still show the same and your set up options have the same menus.

One thing that is different though, is the ability to select a wallpaper for the display. The 525 lets you choose a screen wallpaper where the 424 does not. While this has no effect on the taste of your coffee it is a nice feature if you are trying to add aesthetics to your kitchen.

It should be noted that the K525 also has a night light feature. It isn’t the display, but instead an LED light on the reservoir side of the machine that will illuminate if you turn it on in the display. Unless you need to walk through the kitchen on the way to the bathroom at 3 am, it really doesn’t have much of a use. However, it is a nice feature if you need it.

Bottom Line: The K525 wins. Even though the added features don’t effect the flavor or brewing of the coffee, they are nice.

4. The C and S Designations

The Keurig 425 is not the same as the 425s. In this instance the machines are exactly the same. However, the “s” at the end of the model number stands for, well, it stands for “bundle”. The K425s comes with a water filter and the reusable My K-Cup. The standard 425 does not have these options. It also comes with a bundle of 24 K-Cups so you can have coffee the day you bring it home.

The “c” designation on the 525 model stands for “cup” (it really doesn’t but at least it matches. Keurig hasn’t stated what they letters actually stand for). The 525c comes with the reusable My K-Cup where the 525 (without the c) does not. 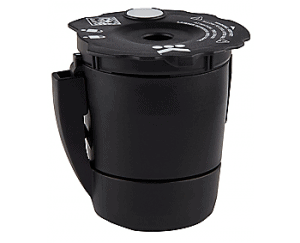 Bottom Line: The K425s wins. It comes with more items that the K525c has standard, but it also comes with k-cups.

Both the K425 and K525 can brew eight different sizes for any of your needs. You can brew individual cups in five different sizes: 4, 6, 8, 10 or 12 ounces. You will use the K-cup pods and select your brew size from the touch screen.

You can also use the reusable My K-Cup which will allow you to use any vendor brand of coffee as well as loose grounds like a standard coffee maker would use.

You will also see options for brewing pot sized amounts. Both machines are capable of brewing in 22, 26 or 30 ounces as well. You will need the Keurig Carafe for this, which is a separate purchase. Neither the 425 or the 525 comes with the carafe.

Bottom Line: A tie. Both have the same brew size capabilities.

Both of the models will brew the same coffee in the same amount of time (under a minute for the k-cups!) and you can choose the strength and temperature for your coffee. So which one is right for you?

If you don’t think you will need the night light and aren’t interested in the fancy display screen wall papers, then you may stick with the K425s. Even though it has a smaller reservoir, you will still get the same coffee from the machine and will save a little cash. If you already have the K425, it really isn’t worth the upgrade to the K525.

However, if you prefer a larger display, need a larger water tank and don’t mind spending a little more, then the K525c should be your choice. While the price may be a little higher and the actual differences don’t have any effect on the actual coffee, The K525 is the newer model and that may be enough to make it worth it.

My choice for the best of these two is the Keurig K525c.