Dyson prides itself for the invention of their very own Air Multiplier technology which makes it possible for their fans to look sleek and bladeless. Dyson’s Pure Cool Purifying Desk Fan DP04 and Pure Cool Tower TP04 are two of the brand’s best-selling fans and they both received a 4.5 rating on Amazon.

The DP04 and the TP04 are both purifier fans powered by Dyson’s Air Multiplier technology and they have the same bladeless design, however, their body type is different. The DP04 has a circular amp and is more portable and is suitable to place in a desk while the Dyson TP04 is an oblong-shaped tower standing tall at 41.5 inches best for large spaces.

Although one is smaller than the other, these two cool and modern-looking machines are very similar in terms of functions and features. The price of the DP04 and the TP04 are also not too far from each other.

So if you are planning to get either one of these fans, you are in the right place. In this article, we will break down the differences, similarities, and specifications of Dyson’s DP04 and TP04 to help you pick which model is the best option for you.

Differences between the Dyson DP04 and the TP04

Similarities between the Dyson DP04 and the TP04

The table below provides the specifications for the DP04 and the TP04:

Comparing the Dyson DP04 vs TP04 in Detail

It is hard to compare Dyson’s DP04 and TP04 because they are very alike except for their body type. The DP04 has a smaller body and has a round-shaped amp. It is designed to sit on your desk, hence, the name of the series – Desk Cooling Air Purifiers. Meanwhile, the TP04 is taller and has a more oblong-shaped tower type body. The TP04 and the rest of the Pure Cool Tower models are designed for large spaces. 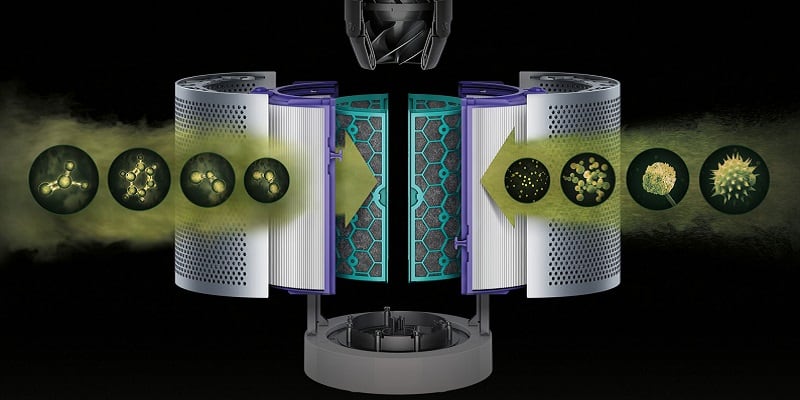 The Dyson DP04 and TP04 are both purifier fans. They can both purify the air and function as a regular fan as well. They are both fixed with the same Glass HEPA Media that filters 99.97% of microscopic airborne particles as small as 0.3 microns and Activated Carbon that captures bad odors, gases, toxins, and VOCs (Volatile Organic Compound).

Dyson fans are powered by the brand’s very own Air Multiplier technology. The technology makes it possible for Dyson to hide the blades of their fans. And unlike other traditional fans in the market, the DP04 and the TP04 do not have exposed spinning blades which makes them safer and easier to clean. They also have an oscillation of 350 degrees.

Both the purifier fans are WiFi-enabled and they can be connected to the Dyson Link App which you can easily download to your mobile phone. It can also be linked to Alexa allowing you to voice command the device. They also come with a remote control accessory so you could effortlessly control the device without physically reaching for it.

The DP04 and TP04 have the same LED display which shows not only the temperature of the fans but also the kinds of allergens and particles lingering in the air. When it comes to the modes, they also have the same modes: Jet Focus Mode for more direct air flow, Diffused Mode for broader air distribution, Automatic Mode, Backward Airflow Mode allowing you to use the device even without turning the fan on, and the Night Mode which dims the display and streams the air quietly.

When it comes to safety, the TP04 has a Child Safe feature which automatically shuts off the device when it’s hit or knocked over. This feature is great for when you have kids and or pets running around the house. However, this is just an extra feature. Both the DP04 and the TP04 are safe to use due to its design and build.

The price of the DP04 and the TP04 also differs. The TP04 is more expensive since it has a taller body designed to purify the air of a large room, unlike the DP04 model which is more compact and is devised to sit on top of a desk.

Q. How many times should the filter be changed?

A. Dyson suggests changing the filters at least once a year but it is usually indicated on the display of the device when you have to change the filter already. Replacement filters are available at their stores. Authentic Dyson filter is recommended.

A. Yes, both the DP04 and the TP04 models have Activated Carbon which traps the gases, fumes, smoke, and other household odors.

Q. How many square feet can the fans cover? 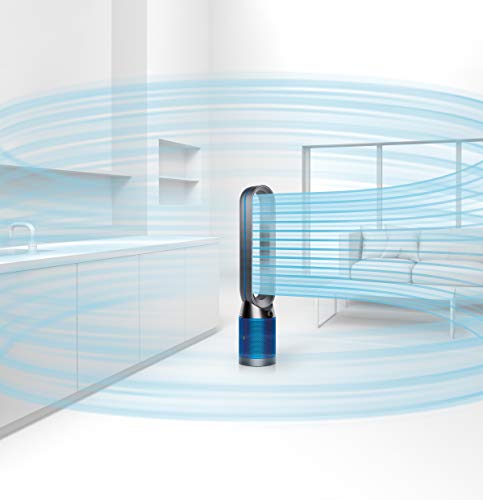 Q. Can the air filtration system of the DP04 and the TP04 lessen the occurrence of dust in the house?

A. Yes, the amount of dust in the air will be reduced.

Q. Can the fans cool the air like an air conditioner?

A. No, it’s not because they are not air conditioners. The TP04 and the DP04 are fans and will act just like a fan.

Q. Can the device dim the light on its display?

A. Yes, both the DP04 and the TP04 have Sleep Mode option which dims the light of the display and disperse air more quietly.

Q. Do the fans oscillate?

Q. Do the fans feature a motion sensor?

A. No, but you can still control the device through the remote control and the Dyson Link App.

Q. Can I turn off the WiFi connectivity?

A. Yes, the WiFi feature can be turned off but you won’t be able to use the Dyson Link App or Alexa.

Dyson’s Pure Cool Purifying Desk Fan DP04 and Pure Cool Tower TP04 are both exceptional fans. The way they are designed fits a modern home – sleek and classy. There are no visible spinning blades as well which makes them great if you have kids and pets in the house. Both of them also have advanced air filtration systems making them ideal for asthmatics, people with allergies, light smokers, and pet owners.

The DP04 and the TP04 are expensive and choosing which fan to get is confusing since they only have a slight difference and that would be the air coverage and their build. If you are planning to get any of these two machines, here are the things that you should consider:

Dyson is a trusted brand and they make quality appliances. The Dyson TP04 and the DP04 are very expensive machines from the brand. Overall, they both look great and they have dual functionality: purifying and cooling. However, if I have to choose between the two bladeless fans, I would pick the DP04 because it is cheaper and it basically has all the features of the TP04 except for the Child Safe feature and the tower-type body. The TP04 is great for large spaces but you can’t underestimate the Dyson DP04 because despite it being a desk fan, it still covers a lot of space. 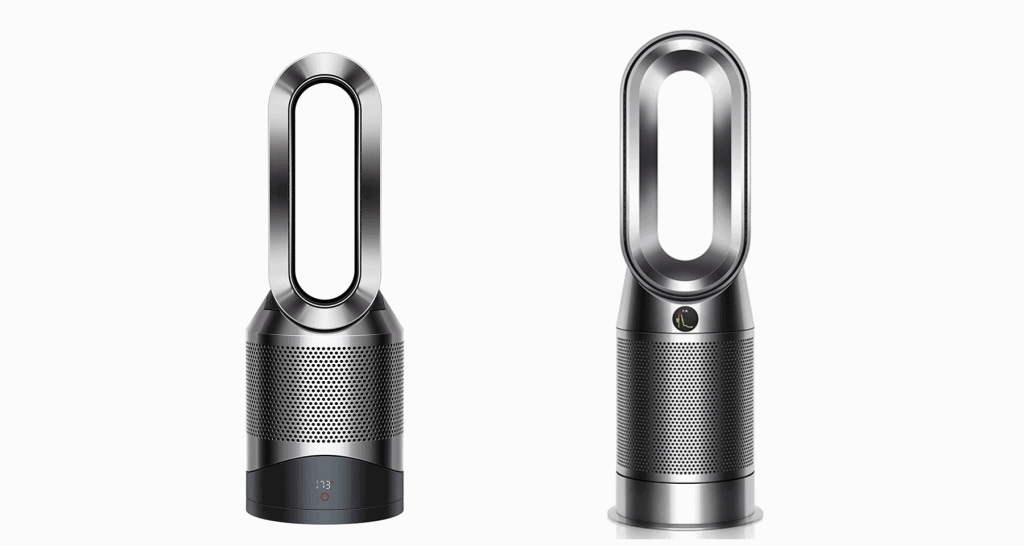 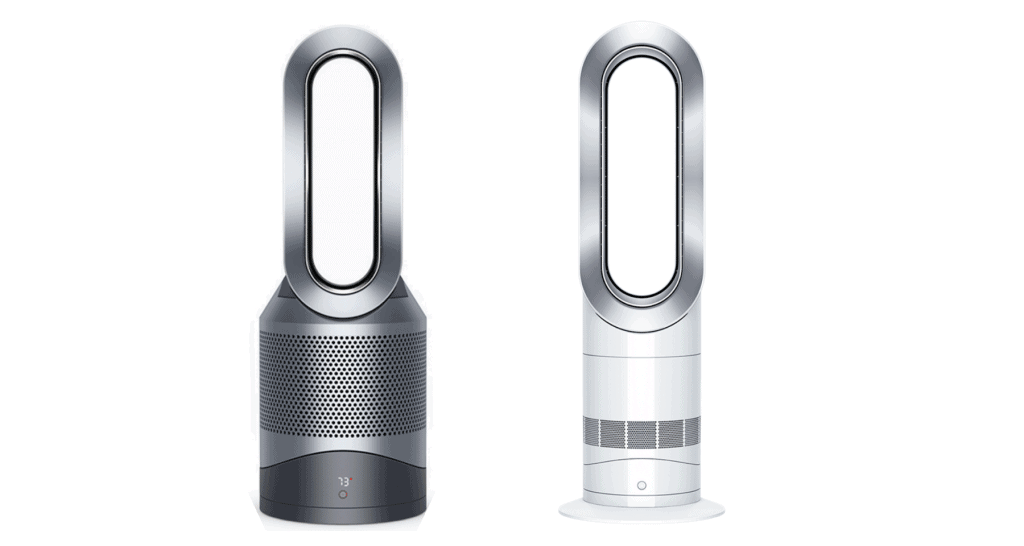