Dyson manufactures some of the highest quality air purifiers on the market. If you need help deciding which one to pick, you are in the right place.

The HP01 was the Pure Hot + Cool lineup’s first model. Dyson later released Dyson HP02 – the upgraded version of HP01 – then followed by the HP04, the latest model of the lineup.

The HP01 and the HP02 are almost identical except for the added Wi-Fi connectivity feature on the upgraded version while HP04 is more advanced and much more expensive.

In this article, we will be looking at the differences between the HP02 and the HP04 – skipping the HP01 since it has the exact same specs and design as the HP02 minus the Wi-Fi controls.

Differences between the Dyson HP02 and HP04

Similarities between the Dyson HP02 and HP04

The HEPA Filter captures 99.97% of microscopic particles 0.3 microns in size. Why 0.3? Because this is the size that evades most regular filters.

On the other hand, the HP04 has a more advanced filtration system.

The HP04 comes with an LED screen that allows you to check what particles and gases are currently lingering in the room. The HP02 also has an LED screen but it only shows the target heating temperature. The HP04 also has a 350-degrees of oscillation and can blow purified, hot, and cool air around the full radius of the room and it includes a Backward Mode – a mode where you can enjoy purified air without heating or cooling function. On the other hand, the HP02 does not support the 350-degree oscillation and the Backward Mode.

Another major difference is the price point. Since the HP04 device has a number of additional elements and benefits it costs a little higher than the HP02.

Dyson has a consistent design language for all of its air purifiers which distinguishes them from other brands. The HP02 and the HP04 are very similar in terms of design, although there are some minimal differences like the HP04 is slightly bigger and heavier than the HP02, it is safe to point out that the designs are the usual Dyson style.

It has a long-range projection and evenly circulates the already purified, cooled, and heated air across the room. The HP01 also pivots on its own and is remote control operated – letting you control the air purifier and change modes with ease.

When it comes to the modes, the two devices have the same modes – except for the Backward Airflow Mode – they both have the following modes: Jet Focus Control, Diffused, and Night modes. The Jet Focus Control mode has a more controlled and focused air stream, the Diffused mode has a wider airflow, and the Night mode dims the display and purifies the air quietly. Both models from the  Dyson Pure Hot + Cool lineup also support WiFi connectivity, Dyson Link App, and voice control. They also have a space heater, sports a HEPA filtration system, and fan which will distribute the purified air in the room. The HP02 and the HP04 are both certified asthma and allergy friendly by the Asthma and Allergy Foundation of America. 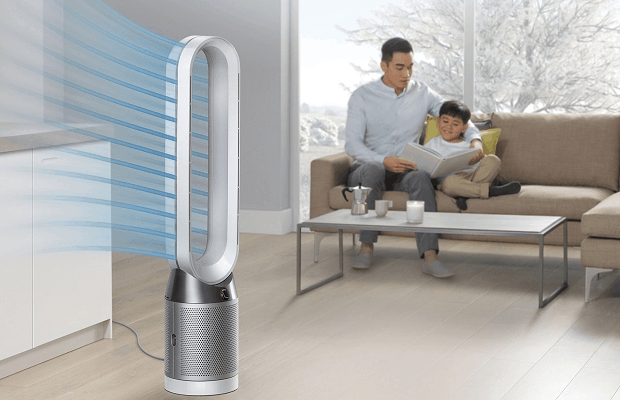 Both the Dyson HP02 and the Dyson HP04 have the same tower style and are bladeless. The air purifiers have three functions: purifying, heating, and cooling respectively. Each purifier also has the same modes, except for the Backward Mode which is only available for the more advanced HP04. They both have a remote control accessory, LED screens, and are WiFi enabled which makes them compatible with Alexa and the Dyson Link App. 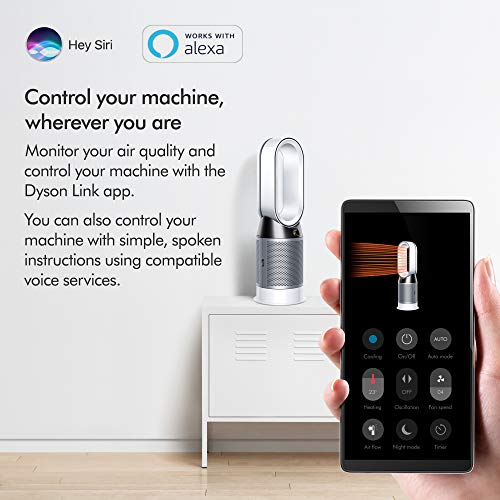 The Dyson HP04 uses a dual filter design and has an oscillation range of 350 degrees while the HP02 only has a range of 180 degrees. Both have 10 precise airflow settings, have sleep timer, and can tilt. The HP04 is a little larger than its predecessor. It weighs 12.6 lbs while the HP02 weighs only 8.62 lbs.

Because of the added features and benefits, the HP04 costs a bit more.

A. Yes, both models are WiFi enabled.

Q. Does Dyson disable the control for the heat on the Dyson Link App and require you to use the remote?

A. No, Dyson does not disable it. You can use the Dyson Link App for the heat on HP02  but you can’t use the app for heat with the HP04. You can only use the remote to control the heat in the HP04.

Q. Will the device warm the floor?

A. No, the fan propels the warm air into the room.

Q. Can you get replacement remote controls?

Q. Can the air purifier run without the fan or heat?

A. No, the only way to purify the air is to run the fan.

Q. Does it work with Alexa?

A. Yes, both the HP02 and HP04 are WiFi enabled and support Alexa.

Q. Do I need to change the filter? 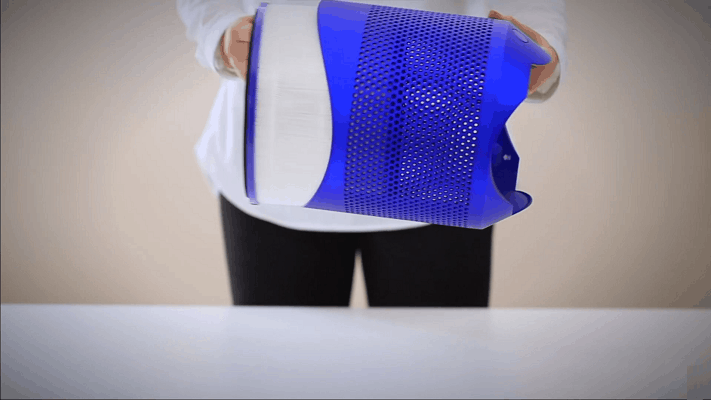 A. Yes, Dyson suggests that filters need to be changed once a year based on it running 12hrs/ day. Replacement filters are available from Dyson for $69.99.

Q. What’s the difference between the HP02 and the HP04?

A. Aside from the price, the HP02 has 360 Glass HEPA while the HP04 has HEPA + Carbon filter. The HP04 also has a Backward Mode – a mode where you can enjoy purified air without heating or cooling function.

Q. If power goes out, does the unit automatically return to power?

A. No, it doesn’t automatically turn the power on.

Q. Do the units also dehumidify?

A. No, air purifiers don’t dehumidify.

The bottom line is that both the Dyson HP02 and the Dyson HP04 are great units and they are worth investing in because they do the job of  keeping the air in your room clean. The Dyson Pure Hot + Cool air purifiers are for everyone, especially allergy sufferers, asthmatics, light smokers, and pet owners. Picking which model to get, whether the HP02 or the HP04, can be a tough decision. So here are the things that you might want to consider before buying:

If given the choice, I would get the HP02 for myself since it’s cheaper and the specs are not far from the HP04. It gets the job done and honestly, aside from the new filters and the Backward mode, nothing else is new.