Dyson has a wide range of home appliances – from vacuums to hand dryers. But one of their most popular products is their bladeless fans and air purifiers. They created several selections for each product to cater the different needs of their customers.

Dyson created the Pure Hot + Cool air purifier lineup which includes three models: the Dyson HP01, Dyson HP02, and the Dyson HP04. This lineup has three functions: air purification, heating, and cooling. Dyson also released the Hot + Cool fan heater which comes in one model only, the Jet Focus AM09.

A wide selection is great because it gives buyers options which to pick but sometimes having many options is hard because you don’t know what to get considering that appliances are not cheap.

Read on as we break down the differences between the Dyson Pure Hot + Cool HP01 air purifier and the Dyson Hot + Cool Jet Focus AM09 fan heater.

Differences between the Dyson HP01 and the AM09

Similarities between the Dyson HP01 and the AM09

Comparing the Dyson HP01 vs AM09 in Detail

Dyson offers a wide range of fans. The HP01 is a fan that’s capable of purifying, cooling and heating while the AM09 can only heat and cool the room temperature.

The AM09 is one of Dyson’s premium fan models. It has that classic Dyson design – bladeless and oblong-shaped. It’s aesthetically pleasing and safer than traditional fans because it doesn’t have exposed spinning blades; thanks to Dyson’s Air Multiplier technology.

The AM09 acts as a heater and cooler in one. Aside from it being bladeless, the AM09 also has no visible heating elements and it automatically shuts off when it’s tipped over making it safe to use with babies and pets around. It also has an LED display which shows the mode, speed, and temperature the fan is set to. It is not WiFi enabled but it has a remote control that you can use to switch to hot or cold, change the intensity of the air being distributed, control the sleep timer, and of course adjust the temperature that you like.

The HP01 also sports the same design, bladeless and oblong, as the AM09 but it’s larger and heavier. It has a HEPA filter that captures 99.97% of allergens, as small as 0.3 microns, dust and pollens and other air pollutants. It also has an Activated Carbon that traps fumes, harmful toxins, and household odors.

The HP01 also has an LED display just like the AM09 and features the same heating and cooling functions of the AM09. The HP01 and the AM09 have 10 Air Speed settings and automatically shut off if tipped over.

Both Dyson fans have the Jet Focus Control Mode and the Diffused Mode which allows you to adjust the airflow from a diffused, broader distribution to a more focused, direct stream. However, HP01 gets two extra modes – the Auto mode and the Night mode. The HP01 has been awarded the Quiet Mark accreditation and is certified asthma and allergy friendly by the Asthma and Allergy Foundation of America as well.

Both the Dyson HP01 and the AM09 are great and impressive machines but you can’t deny that the price of the HP01 is a little steep if you are on a budget. It’s because of the added air purification feature and the extra modes it has.

Q. How warm can the unit get when in heat mode?

A. Dyson engineered it to never rise above the maximum of 200°C and the unit intelligently adjusts its output based on the temperature of the room.

Q. How much space in the room can the fan cover?

A. The room cover of the fans is not specified but they are suited to standing on the floor of a room.

Q. Do the fans work as a good air conditioner?

A. No, it’s not an air conditioner. It will circulate air like a fan.

A. Both the HP01 and the AM09 are equally energy efficient.

Q. Is the remote control included in the package? 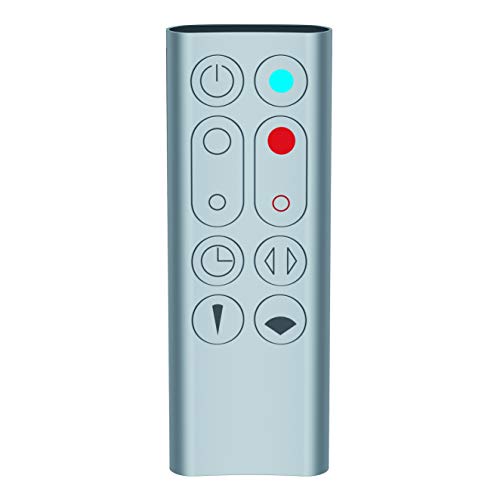 Q. Are replacement filters required for both units?

A. The AM09 does not have any filter while the HP01 requires filters to be changed once a year based on it running 12hrs/day. Replacement filters are available from Dyson for $69.99.

Q. What’s the difference between the HP01 and the AM09?

A. The HP01 has air purification benefits, aside from its heater and cooling properties. It also has a HEPA filter and Active Carbon filter, great for people suffering from allergies and asthma. Meanwhile, the AM09 has the heater and cooling functions only.

Q. Do the fans rotate?

A. Yes, both the HP01 and the AM09 have rotate functions. You can set it to rotate or remain stationary.

Q. Can the HP01 air purifier run without the fan or heat on?

A. No, it’s just a fan that happens to pull air through a filter before pushing it your way.

Q.  Do the items have a warranty?

A. Yes, the units both have warranties. Dyson will replace or repair any of their items if it’s damaged.

The Dyson HP01 and the AM09 are impressive machines. They are safer than the traditional fans being sold in the market and they look aesthetically pleasing because of their sleek and modern design. The two are very similar except for one feature you’ll find only in the HP01 – air purifying. Both the Dyson HP01 and AM09 are for everyone but the HP01 is much better for people with allergies and asthma, light smokers, and pet owners because of its air purification benefit. If you are planning to get either of the these two Dyson units, here are the things that you should consider:

If I were to pick which unit to get, I would pick the HP01. Yes it’s more expensive than the AM09 but you get what you pay for. It has three functions: purifying, heating, and cooling in one machine.

Although the AM09 is cheaper and gets the job done, I think it is expensive for the features it offers. It’s a great fan but it’s not something that I would pick.