Dyson makes some of the best fans in the market. Their fans have a design that is unique to Dyson – classic, modern-looking, and bladeless. The latest from their Pure Hot + Cool series is the Dyson HP04 while the Pure Cool Tower series has the TP04, one of the best models in the lineup.

The HP04 is equipped with three main functions: purify, heat, and cool. Aside from that, it is also WiFi-enabled. Meanwhile, the Dyson TP04 only has two main purposes – air purification and cooling. And just like the HP04, it also has WiFi connectivity.

Aside from your budget, choosing which of these two impressive Dyson fans to get would boil down to what kind of fan you need. Do you need a fan with a heater or are you all good with a purifier fan?

Differences between the Dyson HP04 and the TP04

Similarities between the Dyson HP04 and the TP04

The table below provides the specifications for the HP04 and the TP04:

Comparing the Dyson HP04 vs TP04 in Detail

The HP04 and the TP04 are both impressive. But there’s no denying that the two are very similar except for some functions and design.

The HP04 is a 3-in-1 machine. It can purify the air in the room, give you heat when you are cold, and acts as a fan to cool you on hot days. Meanwhile, the TP04 has the same functions except for the electric heater, however, the TP04 has a Child Safe feature, unlike the HP04. The Child Safe feature automatically turns off the device once it’s knocked over. 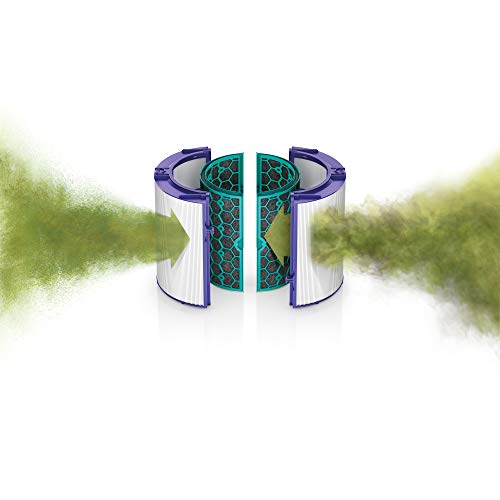 When it comes to the body aperture, the TP04 is slender, taller, and lighter than the HP04. The HP04 is heavier because of the added heater benefit but it is a little boxy than the TP04. The design of both machines also makes it easy to clean. You can use a clean cloth to wipe down the body of the fans

Another feature that both HP04 and the TP04 have is the LED display that indicates not only the temperature of the fans but also the kinds of allergens and other air particles lingering in the air.

They also have the same modes – Jet Focus Mode if you want a more direct air flow,Diffused Mode for wider air distribution, Automatic Mode,  Backward Airflow Mode if you want to use the device for air purification only, and the Night Mode which is perfect when you are sleeping because it dims the display and streams the air quietly.

Going to the prices of these two machines, the TP04 is more affordable than the HP04 just because it does not have the heater option that the HP04 has.

Q. Can I separate the fan from the purifier?

A. No, the fans of the HP04 and the TP04 can not be separated from the purifier.

Q. How many times do I have to change the filters?

A. Dyson suggests that the filters should be changed at least once a year based on its running 12hrs/ day.

Q. Are the filters washable?

A. No, the filters are for single use only.

Q. Does it filter out bad odors?

A. Yes, it has an Active Carbon filter which traps the fumes and the gases.

Q. Will the air purifier work even if the fan is not turned on?

A. Yes, the HP04 and the TP04 can run the air purifier on their own because they both support the Backward Airflow Mode.

Q. Can the device heat a small bedroom?

A. Yes, the HP04 can heat a room because it has a built-in heater but the TP04 can’t because it does not have a heating feature.

Q. Does the Dyson Link App have all the functions of a remote control?

A. Yes, it can act as a remote control plus you can even control your device even when you are not home as long as the device is connected to the internet.

Q. How effective are the devices when cooling a room?

A. Both the HP04 and the TP04 are fans and it does not change the temperature of the air.

Q. What is the difference between HP04 and TP04?

A. The difference between the HP04 and the TP04 is that the HP04 has a heater function while the TP04 does not have that feature.

A. Yes, both the HP04 and the TP04 have warranties and Dyson will replace or repair any of their items if it’s damaged.

The Dyson HP04 and the TP04 are great fans. They are both capable of purifying your homes with powerful HEPA and Activated Carbon filters. Both the HP04 and the TP04 give you information on what kind of air particles are floating in your room so they are both excellent for people with asthma and allergies, light smokers, and pet owners. They are almost the same with very minimal differences and choosing which model to get will all boil down to your preferences, your needs, and of course, your budget.

If you are planning on getting either of these Dyson fans, here are the things that you should consider.

There’s no doubt that the HP04 and the TP04 are impressive, after all, the brand Dyson has been in the market for a long time and they have gained the trust of the people for making great appliances. However, HP04 and TP04 are very expensive. You will be paying hundreds of dollars more just for a fan, although they are both multipurpose, it is not practical.

They look amazing and they are more safe than traditional because they are bladeless but there are other brands in the market that make better and more powerful purifier fans and heater fans and maybe you should take a look at them before investing in HP04 and TP04.

I don’t think they’re worth it, not to mention that you have to pay a separate fee for replacement filters every year. But if you really want to get a Dyson, I would suggest you pick the HP04. It is more expensive but you will be getting a purifier, a heater, and a fan in one device. You will also get much better air purification benefits because it has an upgraded HEPA + Carbon filter. Yes, it does not have a Child Safety feature but I think the device itself is already safe even with kids and pets in the house because its blades and its heating elements are not exposed.