Dyson’s Pure Hot + Cool Series (HP Series) is probably one of the best lineups the brand has come up with. The units in the HP Series are capable of purifying, heating, and cooling. They are also made of high-quality materials. Dyson won’t be a cult favorite if they are not a well-known brand. Despite their hefty price tag, Dyson’s home appliances, especially their air purifier fans, are among the best in the market.

When you search the internet for a good air purifier brand, Dyson would probably pop up. And the Dyson HP06 is as impressive as the brand itself. It has a unique bladeless design and a high-grade air filtration system. It also supports WiFi, can be linked to the Dyson Link App, and can recognize voice commands via Amazon Alexa and Apple Siri.

The HP06 has a design that is similar to all Dyson air purifier fans. It is a tower fan with its blades hidden inside its pedestal so the device appears to be bladeless. It looks very similar to other HP Series models, an oblong-shaped amplifier and a sturdy looking pedestal. Its pedestal has a more bronze/gold tone compared to previous models. It is also free from awkward metal grills.

In addition, the HP06 also has a small display in front of its pedestal that shows air quality and what kind of air pollutants are present in the air. It is also designed to cover large spaces, standing at 30.1 inches tall and it weighs 12.46 lbs.

The HP06 uses Dyson’s patented Air Multiplier technology that projects over 77 gallons of air per second across the room despite the lack of big, fast-spinning blades. The Air Multiplier technology uses nine asymmetrically-aligned blades and a brushless electric motor that are hidden inside the machine’s pedestal instead so it is able to deliver a powerful air stream.

Formaldehyde are harmful particles that can be found on many household products.  And unlike the other HP Series models, the HP06 is equipped with the Dyson Cryptomic technology that not only captures formaldehyde but also destroys it.

When it comes to performance, the HP06 is an impressive machine and it certainly is superior from its predecessor and other models from the HP Series lineup. It uses a more advanced technology like the Dyson Cryptomic technology plus the Air Multiplier technology that Dyson uses to power most, if not all, of their air purifier and fans.

The HP06 is equipped with a high-grade Glass HEPA Media filter which means it can capture 99.97% of ultrafine particles, as tiny as 0.3 microns, including pollen, bacteria, dust, pet dander, and other air pollutants in the air. It also has a layer of Active Carbon that absorbs bad odors, gases, toxins, smoke, formaldehyde, and VOCs (Volatile Organic Compound). And with the Cryptomic technology, the HP06 is capable of destroying formaldehyde particles. The HP06 is ideal for people with asthma and allergies since it improves air quality. It can also automatically detect what kind of air pollutants and gases are floating in the room and report it.

This air purifier has an oscillation of 350 degrees and 10 air speed settings to really maximize air circulation. For people who are sensitive to noise, the HP06 is a very quiet device and has received the Quiet Mark accreditation.

The HP06 is also among the safest fans in the market. Its design is what makes it a safe fan. It does not have exposed fast-spinning blades that can cause injuries so it is relatively baby safe.

The HP06 also supports WiFi connectivity so you can link it to your mobile device by downloading the Dyson Link App. The app serves as a remote control as well and notifies and reports about air quality. Another way to control the device is via Voice Command and the HP06 can recognize voice commands through Amazon Alexa and Apple Siri.

You can also pick different mode options of your liking. The HP06 comes with different mode options like the Auto mode that automatically adjusts the airflow, checks the quality of air, and turns the device on or off; Night mode that adjusts the brightness of the display and purifies the air by using the quietest settings; Jet Focus mode for a focused, direct, and powerful air stream; Diffused mode for broader, wider air distribution; Backward Airflow mode that allows you to run the air purifier even if the fan feature is turned off. It also has a Sleep Timer and a Custom mode.

This air purifier is on the expensive side but compared to Dyson’s HP06, this one’s a little cheaper. It uses Photo Electrochemical Oxidation (PECO) nanotechnology to destroy air pollutants, viruses, bacteria, and VOCs. It can also cover large spaces, has a touch-screen display, and supports WiFi. It is a portable device with a leather handle so you can carry it anywhere. However, it is not a 3-in-1 machine unlike the HP06. Molekule Air Purifier can also purify air but it is not capable of heating or cooling.

This Alen BreatheSmart 45i air purifier is a powerful machine. It can cover large areas, 800sq/ft every 30 minutes to be exact and circulates air up to five times every hour. And not only it has a sleek design, but it kills germs and molds using a True HEPA filter like the HP06. This air purifier has an air quality light and sensor which changes color when the device detects air pollutants. It does not have heating and cooling functions like the HP06 but it is more affordable.

This air purifier is an impressive device. If Dyson uses its patented Air Multiplier technology, this device uses  NCCO (Nano Confined Catalytic Oxidation) technology to remove and destroy harmful air pollutants. It also uses a Medical Grade True HEPA filter to capture 99.97% of ultrafine particles as small as 0.3 microns. Like the first two devices, the Westinghouse 1701 does not offer any heating or cooling features but it is more affordable compared to the HP06.

Q. What kind of pollutants can the HP06 filter?

Q. How many times should I change the filters?

A. Dyson suggests that filters need to be changed once a year based on its running 12hrs/ day.

Q. Can the HP06 get rid of formaldehyde?

A. Yes, the HP06 has the Dyson Cryptomic technology that traps and destroys harmful formaldehyde particles.

Q. Is the HP06 capable of cooling and heating?

A. Yes, the HP06 is a 3-in-1 device that can purify air and serve as a space heater and fan at the same time.

Q. Does the Dyson Link App report what kind of air pollutants are in the air?

A. Yes, the Dyson Link App not only serves as a remote control but it also notifies you and reports about the air quality.

A. Yes, the HP06 is a tower fan, standing at 30.1 inches and weighs 12.46 lbs, designed to cover large spaces like your bedroom and living room. 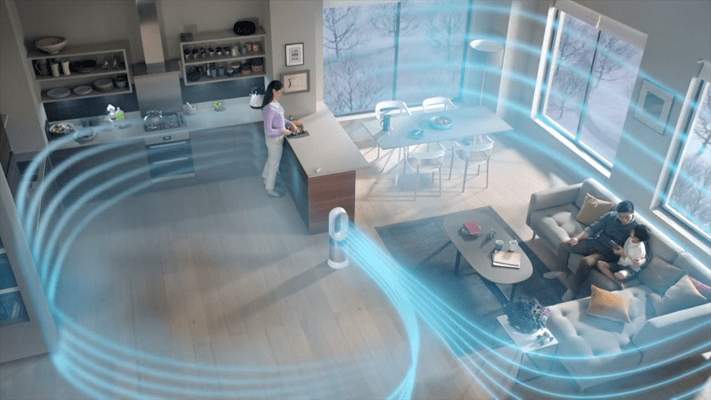 Q. Can I turn off the WiFi feature?

A. Yes, the WiFi feature can be turned off.

Q. Can it work even without the remote control?

A. Yes, the HP06 will still work even without the remote control. You can either use the Dyson Link App as a remote control or use Voice Command via Amazon Alexa and Siri.

Q. Are the filters washable?

A. No, the filters are for single use only. You can get replacement filter cartridges directly on Dyson or on Amazon. 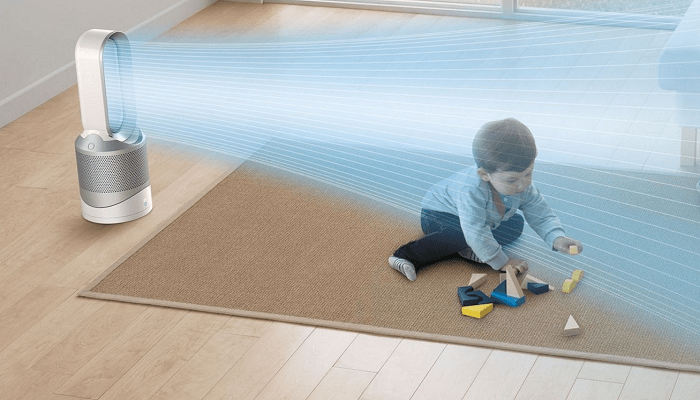 The HP06 is a very good air purifier. It is equipped with high-grade filters: 360 Glass HEPA Media and Active Carbon, and uses state-of-the-art technologies–the Air Multiplier technology and the Cryptomic technology. It can filter up to 99.97% of microscopic particles, as small as 0.3 microns, including dust, pollen, molds, allergens, pet danders, and other air pollutants. It also absorbs bad odors, gases, toxins, fumes, and VOCs.

The wide variety of mode options is also great since you won’t have to adjust the settings manually. For a modern device, it is only fitting for the HP06 to have WiFi and support voice command. The unique design of the remote control is also a nice touch. It is not very life changing but having a magnetic remote could prevent you from misplacing the remote control. The design of the HP06 is also very good and consistent with all Dyson fans. Plus it is kid-friendly as it has no exposed fast-spinning blades that could injure or harm kids and pets when they play around the house.

With its 3-in-1 function the HP06 is a space saver. And although it is an expensive machine, you will still be saving money since you’ll be getting a device with 3 functions. But if you already have either a fan or heater and you are only after the air purifying feature then the HP06 is quite expensive. I suggest you check out other brands for alternatives or other models from Dyson’s other lineups. But overall, I would recommend the Dyson HP06. It is  a good-looking device with great features.